Is Co-Creation Always the Answer to Major Problems?

It takes a special effort to achieve something out of this world—like, say, putting a man on the moon. The remarkable lunar landing whose 50th anniversary we marked last year (2019) was an embryonic example of the kind of whole new level of partnership we believe is required to really move the needle on some of our globe’s biggest development issues.

More than simple cooperation or mere collaboration, what’s required is what the business world has identified for some time as co-creation. At Geneva Global we have defined co-creation thus:

An iterative, equitable process that removes barriers for all actors to meaningfully contribute their knowledge and skills to achieve sustainable and scaleable solutions to bring positive social innovation into the world.

While the willingness we have seen for others to embrace this new paradigm since we began championing it recently is affirming, it’s important for anyone open to setting out on this kind of journey to do some serious self-assessment before departure—as they would for any major expedition to new territory.

Here are seven crucial areas to consider if you are interested in the potential benefits of co-creation.

What you are looking to achieve has to be exponentially more than you could manage on your own if you just had more funds, personnel, or other important resources. We are talking about one of those BHAGs—Big Hairy Audacious Goals—that business coaches like to refer to. If what you have in mind is just your existing impact scaled up, that result might be possible without all the demands true co-creation will make of you.

Though this bigger picture may be more than you have dared to aspire to, it will still be realistic in the sense that, like other goals, it is smart: specific, measurable, achievable, realistic, time-bound. Can all the various actors agree on what shared success will look like?

Fundamentally, embracing the need for co-creation acknowledges that you do not have the capability or capacity to go it alone—otherwise you probably would, or perhaps should, have done it by now yourself. That recognition means that there others out there who know and have things that you do not—including, perhaps, a perspective on the challenge and the response you are unaware of, which may even help shape a clearer goal for everyone involved.

You are not just looking for others who can provide what you know you are missing: as the old saying goes, You don’t know what you don’t know. They may help you identify what you did not even realize was missing in the first place. Embracing diversity will mean letting go of some control.

Really being aware that what you are attempting is bigger than any one player truly encourages a team approach. It’s not just about everyone else doing their part to make sure a single star player shines.

It also means taking the long view—for example, accepting that some other actors may get more credit than you do, because their contribution is more visible or comes before your turn in the spotlight. At such times, when domestic stakeholders may well, appropriately to a degree, be asking what’s in it for your particular area of expertise and interest, can you hold to the view that it doesn’t matter who gets the credit if something extraordinary is achieved?

An appropriate sober assessment of what you can bring to the table will require an honest look back at what you have achieved thus far. Given that co-creation involves everyone taking some level of risk with the others involved, would those who may be interested in an endeavor with you be well advised to consider linking arms, in the light of your track record? And have you experimented with aspects of co-creation internally?

You will want to evaluate others, too. What do they really bring to the table? Some co-creation partners may be new to the space you are addressing, of course, but if no one has any experience or expertise to build on, you’re wishing on a star rather than shooting for the moon.

Because co-creation necessitates a high level of interdependence, any evaluation of competency can’t be based on results alone. There has to be a degree to which you are known not just for getting things done, but for how you go about that—whether you “play well with others,” so to speak.

Sadly, the social impact world has its share of actors who may have achieved things operationally, but who have reputations for being so difficult to work with that, at the end of a particular project or endeavor, partners have not wanted to be involved with them any further.

Much potential future impact has been sacrificed to present incompatibility. Relational goodwill is the lubricant necessary for any initiative with multiple moving parts and partners.

By its very nature, co-creation is, to a degree, open-ended. Goals may need to be clarified or redefined as you go. Some actors may bow out along the way—either because their part is over, like the separation of the fuel tanks in a rocket launch, or because of internal changes. New leadership may decide they don’t want to pay the price co-creation demands.

Co-creation is an inherently fragile eco-system. Chances are, if you ever get too comfortable in the process and think everything is going along without too much challenge, you might have missed something!

Co-creation isn’t just a high-minded concept; it has concrete, everyday implications. So it is important to consider whether you are willing to pay the price. It may cost you in terms of sharing physical, organizational and even reputational assets. These are resources that any organization would be foolish to offer to others without a serious cost-benefit analysis.

Committing to co-creation will also likely need you to identify and appoint someone to champion the process within your domain. By nature, they’ll have to be someone who can operate in a place of tension, holding firm to both your own and the wider group’s goals and values and defending them to newcomers internally and externally.

One of the sad realities of development, involving as it does so many different agencies with changing personnel, is the amount of time and energy that can get absorbed in simply bringing people up to speed on an initiative’s history, values, and practice. Co-creation needs a process and personnel to “keep the flame” burning.

In one sense, all of these seven points could be applied to any initiative that brings two or more parties together—from marriage and manufacturing to politics and philanthropy. That’s because, at the end of the day, they are all about how people relate to each other. Governments, communities, industries, markets, and organizations are all made up of people, and working with other people is always going to be challenging.

And then there is always the chance that, even with everyone’s best efforts, a co-creative endeavor may fail! There may be times when a guaranteed lesser goal is wiser than a riskier higher one.

So why on earth would anyone even consider co-creation, you may ask?

Good question. My response would be to point to the moon. When President John F. Kennedy said he wanted to put a man up there, in 1962, it seemed fantastical. Seven years later, in what might be seen as one of the earliest and best examples of co-creation, Neil Armstrong took that “one small step for a man, one giant leap for mankind.”

Some things simply won’t get done unless we are willing to look further, stretch wider, reach higher. 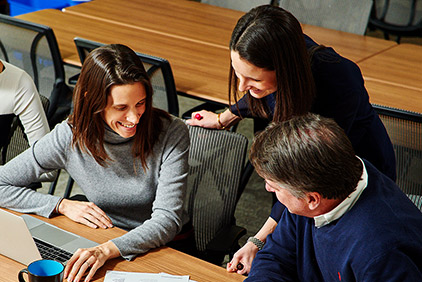 How We Helped the World’s Leading Philanthropists Give $3 Million to...