Why I’m Stepping Down as CEO

A fresh perspective will take Geneva Global to new heights

After nearly 10 years as Geneva Global’s owner and CEO, I will be stepping down as CEO and handing over the reins to a new leader.

I’ve always held a firm belief that most CEOs should not stay in their post for longer than a decade or so. In that time, you tend to have had your best ideas and brought your particular creativity and energy to bear. After 10 years, you are in danger of getting so familiar with the organization that you don’t see the wood for the trees, or miss the next radical direction in which to take the company.

I’ve stayed true to that conviction before, stepping down as the CEO of Tearfund after about a decade in that role, too. So some of my friends and colleagues weren’t surprised when I told them of my decision recently.

At first, we had to survive

I joined Geneva Global in 2006 as the head of international programs, overseeing all the company’s granting, which at that time spanned some 30 countries. The company soon began a transformation to turn itself into an independent and self-sustaining business from its origins as a largely subsidized, foundation-like entity. In September 2008, I bought Geneva Global from the founders. It happened to be the day after Lehman Brothers collapsed (clearly showing my knack for good timing), so to say I was slightly daunted at what I was about to embark upon is an understatement. 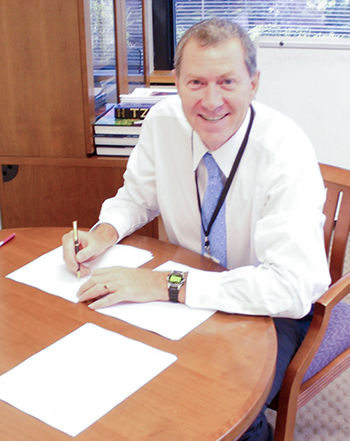 Signing the paperwork to officially buy Geneva Global in 2008.

Those early years were tough. With an extremely lean staff, our focus was on delivering to our clients and surviving as a business. I spent a lot of time cramming my 6’ 2” frame into coach seats on transcontinental flights to check on client programs. I went to endless conferences, trying to drum up new business. And there were several times when I had to put on a confident and optimistic persona for my team when inside I had my own doubts. But while it was exhausting and demanding, it was also exhilarating and rewarding to run my own company and lead a group of fearless and dedicated teammates around the world.

And then we began to thrive

Over time, we started to gain traction and—slowly but surely—we took on more clients and evolved our work to offer a full suite of philanthropic advice and services. As I reflect on what the company has become, I can’t help but feel immensely proud of what our team has accomplished over these past nine years:

The team, pictured in 2016, has grown significantly since its early days.

What the next chapter holds

I am a builder and creator and have loved turning Geneva Global into what it is today. But I now feel it’s time to seek out a new CEO who can bring fresh eyes, original ideas, a new perspective, and is additive to what we already know how to do. Someone who will build on the great foundation we have built together, is excited by our vision, respects our values, and is able to take Geneva Global to the next level.

I am as committed as ever to fulfilling the ongoing vision of Geneva Global being the most innovative and effective philanthropic consultants in the world. Geneva Global will continue to be a force for both transforming millions of peoples’ lives, and bringing innovation and improvements to the philanthropic sector. To that end, I will stay on as Geneva Global’s non-executive chairman and in that role will continue to oversee the mission, vision and values of the organization, while the new CEO runs the company.

With a strong leadership team in place and a talented, diverse, and hardworking staff, I have no doubt that Geneva Global is about to enter an exciting new decade of growth.

If you are interested in taking over my office or know others that would, please visit our Join the Team page to see the job description.